Xylitol is a white crystalline sweetener that occurs naturally in berries, fruit, vegetables, corn, mushrooms and birch trees. In Finland it is known as “birch sugar” because the principal raw ingredient in its manufacture is xylan or wood fibre. It is also found naturally in our bodies, and has been shown to be completely non-toxic.

One of the benefits of Xylitol is the fact that it is both a low-glycaemic sweetener and alkalizing to the body, making it an ideal sugar substitute for those on weight-loss diets and for those wanting optimum health.

Xylitol is identical in taste and sweetness to normal sugar except for a slight cooling effect on the tongue. And there is also no bitter after-taste as with other sugar substitutes.

Xylitol is a “tooth friendly” sugar. Early studies from Finland in the 1970s found that a group chewing sucrose gum had 2.92 decayed, missing, or filled teeth compared to 1.04 in the group chewing xylitol gums. In another study, researchers had mothers chew xylitol gum 3 months after delivery until their children were 2 years old. The researchers found that the xylitol group had a 70% reduction in cavities. Recent research confirms a plaque-reducing effect and suggests that the compound, having some chemical properties similar to sucrose, attracts and then “starves” harmful micro-organisms, allowing the mouth to remineralise damaged teeth with less interruption.

Xylitol is a low-calorie alternative to table sugar. Absorbed more slowly than sugar, it doesn’t contribute to high blood sugar levels or the resulting hyperglycemia caused by insufficient insulin response.

Xylitol also appears to have potential as a treatment for osteoporosis. A group of Finnish researchers has found that dietary xylitol prevents weakening of bones in laboratory rats, and actually improves bone density.

A recent report suggests that consumption of xylitol may help control oral infections of Candida yeast.

Xylitol has no known toxicity, and people have consumed as much as 400 grams daily for long periods with no apparent ill effects. Like most sugar alcohols, it has a laxative effect if taken in large doses because sugar alcohols are not fully broken down during digestion. The effect depends upon the individual and it is recommeded to slowly integrate xulitol into your diet. In one study of 13 children, 4 experienced diarrhea when consuming over 65 grams per day.

Under no circumstances should you ever give xylitol or products containing xylitol to dogs. Dogs which have ingested foods containing high levels of xylitol (greater than 100 milligram of xylitol consumed per kilogram of bodyweight) have presented with low blood sugar (hypoglycaemia) which can be life-threatening. 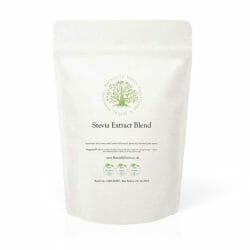 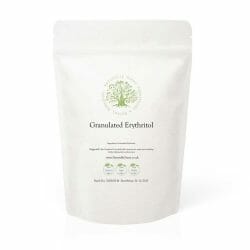 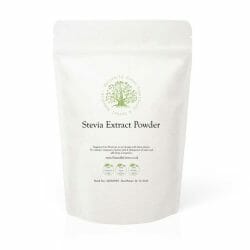 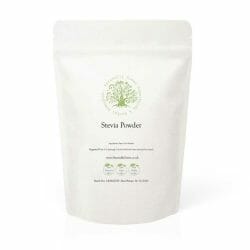