Due to the continued high volume of orders being received Please allow 1 Business day for your order to be dispatched. (We are currently unable to meet our usual 1pm dispatch time shown below) Thank you for your patience and understanding from everyone at UKHerbals. Dismiss

Psyllium is derived from the seed of the Plantago ovata plant (botanical name: Plantago ovata). Psyllium husk is an excellent source of soluble dietary fibre. It is native to Europe, North Africa and Asia and has been used for thousands of years as a safe and effective bulk laxative.

Psyllium husks are pure dietary fibres that are not digested in the small intestine, but are partially broken down in the colon. Psyllium husks are very safe and are used by millions of people throughout the world as a natural alternative to over-the-counter laxatives.

Interest in Psyllium has grown recently and is often used as an ingredient in high-fibre breakfast cereals. It is also excellent for those with an inadequate fibre intake resulting from modern western fast-food diets or those with a sedentary lifestyle and the elderly.

Dosage – Powder: one or two teaspoons in some water or juice daily, two to three times daily. Husks: One tablespoon mixed into muesli, cereals or yoghurt.

Side effects – none known at the recommended dosage. In large doses, Psyllium fibre may cause loose bowel movements, cramps, bloating and flatulence. 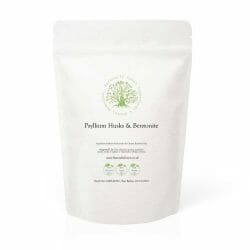 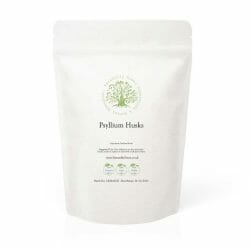