The common dandelion (Taraxacum officinale) is a perennial herb that is native to the Northern hemisphere’s warm temperate zones. It is commonly found in many, fields, gardens, and other open spaces where it is allowed to grow as a common weed.

Dandelion is a common medicinal plant with many positive effects when used as a herbal remedy. It is often used for its beneficial role in the treatment of liver and gallbladder disorders, as well as gut and joint disorders.

Terpenes, phenolics including coumarins and flavonoids, and polysaccharides are the main active compounds found in this plant. Chicoric acid was the most abundant phenolic natural compound. Chicoric acid is found in all parts of the plant and may help reduce blood sugar.

Herbal monographs regard the plant’s use as safe and have found positive results with empiric use of Taraxacum officinale.

The German Commission E, the European Scientific Cooperative for Phytotherapy (ESCOP) monographs (Google Scholar), and the British Herbal Medicine Association all list therapeutic indications for the use of T. officinale (British Herbal Pharmacopoeia).

The study also suggested that Natural-derived compounds may provide some protection against viral entry while posing no or few adverse effects.

Dandelion extract is one of several herbs that support a healthy immune system. Even better, dandelion extract may be able to completely prevent infection by blocking the exact path through which spike proteins attach and lead to viral replication.

The authors of the study caution that Covid-19 Vaccine dependence is risky and dangerous, not only for personal health, but also herd immunity. Vaccine dependence is a high-risk treatment with short-term benefits that focuses exclusively on antibody augmentation. Vaccine-related adverse events such as heart attacks and blood clots are commonly reported. Covid-19 Re-infections are also common following vaccination, as the vaccine exerts pressure on the original spike protein, causing it to mutate.

What are the other benefits of dandelions?

The effects of free radicals can be mitigated due to the Antioxidant propertie.

German researchers from the Institute of Chemistry at the University of Cologne examined extracts of dandelion leaves that had been used in traditional medicine. They found that a specific extract had an effect on the E6 protein in human papillomavirus type 16.

E6 is a protein that increases the risk for cancer. The researchers found that dandelion leaf extract inhibited tumor growth and stimulated differentiation, which is why it is such a promising cancer remedy.

New research has concluded that dandelion leaf can do all of these and more! It was found in a study published last month in the Journal of Alternative and Complementary Medicine that common dandelion extract could inhibit HPV-16. HPV-16 is a virus that causes cervical cancer, with more than 29,000 women diagnosed in 2011.

As you can see, dandelion is so much more than a simple weed we often take for granted and sadly in many cases eradicate with toxic and often carcinogenic weedkillers. Years of research has shown the humble dandelion to be something of a miracle plant and is found in abundance all around us, so get out in the garden and pick some dandelion leaves and make your own dandelion herbal tea or tincture.

How to Make Dandelion Tea.

Dandelion tea can be bitter so add a teaspoon of honey or a natural sweetener such as erythritol to taste.

How to Make Dandelion Tincture.

What is the difference between dandelion tincture and dandelion extract?

Any liquid, such as glycerin, oil, or even water, can be used in an extract. A tincture is an extract in which the herbs are steeped in alcohol as the liquid. To put it another way, all tinctures can be classed as extracts, but extracts cannot always be classed as tinctures.

Anyone allergic to chrysanthemum, ragweed, chamomile, marigold, yarrow, or daisy should avoid dandelion, and those who are pregnant, nursing, or currently taking prescription medications should consult a health care professional or registered herbal practitioner before introducing a new herbal medication into their wellness regime. 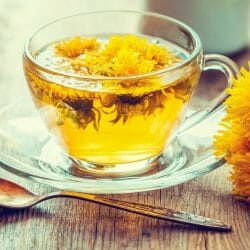 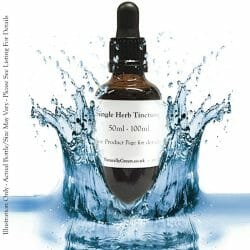